Article Tariffs to be imposed on all Mexican imports

On Thursday May 30, 2019, U.S. President Donald Trump announced through an official White House statement that the U.S. will be imposing tariffs on all imports of Mexico-origin goods into the commerce of the United States. The tariffs, which are... Read more >

On Thursday, May 23, 2019, the International Longshore and Warehouse Union served official notice to GCT Global Container Terminals Canada that its members will begin striking effective 7 a.m. on Monday, May 27. The parties will continue to negotiate in... Read more >

A cybersecurity breach in Facebook's messaging app, WhatsApp, has left users vulnerable to malicious spyware installed on their smartphones. The Financial Times reported that surveillance spyware was installed on phones using WhatsApp’s call feature. The software was installed even if... Read more >

This article was originally published in the Journal of Commerce on April 22, 2019. By Mike Wilder, President of Managed Services & David Merritt, Director of Global Trade Consulting On April 10, 2019, if one were to have stood on... Read more >

Article Ratifying USMCA the Only Responsible Option at this Point

This article was originally published in Global Trade Magazine on March 29, 2019 By Candace Sider, Vice President, Government & Regulatory Affairs The fate of free trade in North America is hanging in the balance. That sentiment would have been... Read more >

The Canada Border Services Agency (CBSA) has announced that the mandatory April 1st date for the implementation of Single Window will be extended, in favor of a “phased decommissioning” approach. The new date is yet to be announced, but is... Read more >

Article What to consider when planning for the post-Brexit period

This article was originally published in Global Trade Magazine on March 21, 2019, By Mike Wilder, Vice President, Managed Services and David Merritt, Director, Global Trade Consulting The past weeks have seen a flurry of parliamentary activity in London, none... Read more >

Article Is a Future U.S.-UK trade deal stuck in a Catch 22?

In regards to the anti-dumping and countervailing duty orders for softwood lumber (SWL), and according to regulations, affected parties need to either opt in or opt out of filing an application for administrative review to the Department of Commerce (DOC).... Read more > 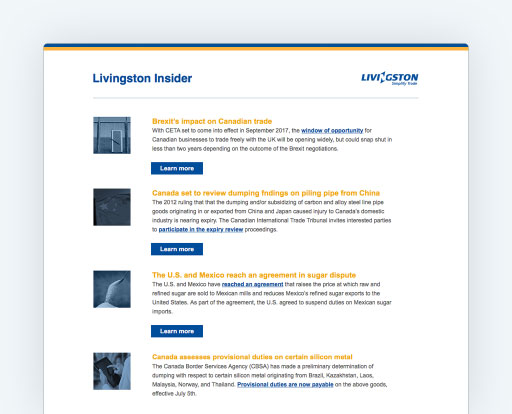 Global Fresh turned to Livingston for assistance in improving its... Read more >