Change in Europe is here. Understanding the future of the UK-EU trade relationship.

Brexit has ushered in a new era of customs administration requirements but also opportunities for cost savings.

On January 1, 2021, the EU-UK Trade and Cooperation Agreement (TCA) was provisionally implemented, setting out the terms of trade between the United Kingdom and the European Union. It is pending full approval by the EU, and the EU-requested extension to the provisional period has been granted by the UK.

Under the TCA, goods moving between Great Britain (but not Northern Ireland) and the EU are mostly exempt from customs duties, provided that origin (GB or EU) can be demonstrated. Value-Added Taxes (VAT) and excise taxes remain due. In addition, controlled goods such as food, chemicals, pharmaceuticals, etc., must meet the new and distinct regulatory requirements of the EU and UK. While in many cases the UK and EU have found ways to harmonize regulatory requirements across their jurisdictions, disparities remain in some areas.

Businesses looking to take advantage of preferential duty through the TCA when importing goods into, or exporting goods from, the UK, will be required to prove the goods they are trading meet the regional-value-content (RVC) origin requirements of the trade agreement. The complexity of the Rules of Origin, the frequency of regulatory change, and the need to obtain annual origin declarations from their suppliers can make it difficult for many businesses to manage on their own.

For generations, businesses trading between the EU and UK have not had to concern themselves with customs administration as the two entities were part of a customs union. With the UK no longer part of the EU, a bevy of new customs requirements have come into force.

Traders in the UK (with the exception of those in Northern Ireland) are now required to submit customs declarations for goods moving between the UK and the EU at both export and import. In addition, businesses looking to avoid paying tariffs under the TCA must be able to verify that goods entering the UK adhere to the Rules of Origin requirements set out in the trade deal.

Traders in both the EU and the UK are facing the burden of having to pay duty more than once when their goods cross the EU-UK border multiple times, as the goods lose EU (or UK) preference entitlement after the first crossing, unless they operate under a duty relief regime (such as customs warehousing). Failure to be able to demonstrate origin eligibility or misrepresentation of information on the declarations or supporting documentation could result in retroactive duties and/or penalties.

As part of the Brexit Withdrawal Agreement that entered into effect on February 1, 2020, the UK province of Northern Ireland will maintain a separate customs regime from the rest of the UK. Known as the Northern Ireland Protocol (NIP), the provision is an effort to maintain a soft border between the Republic of Ireland and Ireland and preserve the integrity of the 1998 Good Friday Agreement.

Controlled goods entering Great Britain from across the Irish Sea must adhere to British regulatory requirements. Goods entering Great Britain that originate in the Republic of Ireland will be subject to duties (if applicable), as well as VAT. Goods that originate in Northern Ireland will be subject to neither duties nor VAT, but controlled goods will be required to adhere to British regulatory standards.

The government of the United Kingdom implemented a series of measures designed to relieve the burden of customs administration throughout 2021. When the UK was part of the EU, the administrative burden of customs was practically nonexistent for British businesses. Brexit changed that – suddenly, companies were faced with the prospect of dealing with customs declarations. The measures put in place by the UK government gave businesses the chance to adjust to these major changes.

Although many of these measures end on December 31, 2021, businesses can still submit simplified customs declarations at the time of entry under the Simplified Customs Declaration Procedure (SCDP – previously known as CFSP). Businesses can choose to gain customs authorization and implement the procedure within their own enterprise or to instead make use of the authorization and system of a customs broker.

For more information on measures to reduce the impact and cost of customs protocols to your business, please refer to our article on relieving the Brexit Burden.

Businesses importing goods into the UK, are required to ensure that their goods are classified under the appropriate UK Global Tariff (UKGT) HS codes. Businesses exporting goods from the UK for import into the EU may also need to classify the goods under the EU Tariff. Accurate classification is essential for customs compliance, and inaccurate classification will result in incorrect duty payment and financial impact. The volume and specificity of HS codes may make the outsourcing of classification attractive.

Contact Livingston today to learn more about the changes you can make to your international supply chains to keep your business post-Brexit resilient, or visit our Brexit Services page to learn more about how we can support you through the transition. 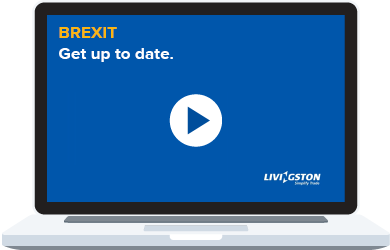 Watch our on-demand webinars to learn what rules will change under the new customs regime, how EU-UK distributors will be impacted, and what you can do to minimize the impact.