This article was originally published in Global Trade Magazine on Nov. 5, 2018 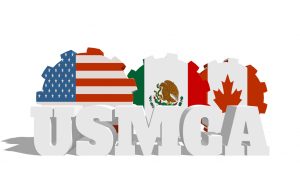 With the U.S. Congressional elections rapidly approaching, there’s been a fair bit of public analysis on the impact a Democrat-controlled Congress might have on the fate of the recently negotiated United-States-Mexico-Canada Agreement or USMCA.

Some have suggested a blue wave in Congress would almost certainly result in the quashing of a trade deal whose fate must be determined by a straight up or down vote. In fact, Mexico’s incoming trade secretary, Luz Maria de la Mora, recently opined that Democrats – who have traditionally viewed free trade in less favorable terms than Republicans – are likely to use the USMCA as a bargaining chip. Others have suggested Democrats may vote down the agreement as a means of spitefully derailing what is widely regarded as one of the Trump administration’s key accomplishments.

Such predictions are certainly plausible given the polarized political dynamic in Washington. But there may be more to quashing the USMCA than political partisanship. After all, each member of Congress, whether Democrat or Republican, represents a defined constituency characterized by its own local needs and considerations. If the USMCA is a stellar agreement that will widely benefit a Congressman’s or Congresswoman’s constituents, it would be politically damaging for him or her to vote against it simply out of spite.

Just how well Americans are embracing the USMCA is an open question. There’s still substantial ambivalence about the benefits of the new trade agreement and the degree to which it will improve Americans’ lives or prospects for employment. A poll carried out by POLITICO/Morning Consult 10 days after text of the USMCA was released by the Office of the United States Trade Representative (USTR) shows 38 per cent of Americans believe the USMCA will have a better or much better impact on manufacturing workers while 29 per cent feel it would have either a neutral or negative effect; the remainder had no opinion. And even fewer (32 per cent), believe the agreement would have a better or much better impact on consumers. Less than half (43 per cent) believe the USMCA is very or somewhat different than NAFTA.