This article was originally published in the Journal of Commerce on Feb. 15, 2019 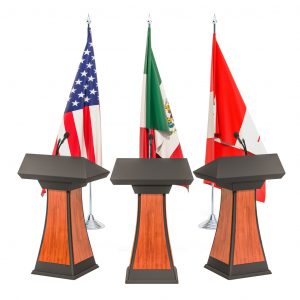 In the coming months, US lawmakers will face the important task of choosing to ratify the United States-Mexico-Canada Agreement (USMCA) or not.

Those are the only two choices under the Fast Track authority, which forces a straight up or down vote in Congress. Precisely which way Congress will vote is still uncertain. House Democrats have expressed concern about the lack of enforceability of the USMCA’s labor and environmental provisions, and have stated they won’t pass the USMCA legislation until the agreement has more teeth.

The Democrats’ concerns aren’t entirely unwarranted. While the enforceability of NAFTA’s provisions were technically executed through the country-to-country dispute mechanism in Chapter 20 of the agreement, the reality was that Chapter 20 didn’t offer genuine recourse for much of NAFTA’s 25-year history.

What exactly needs to be enforced?

The impetus to renegotiate NAFTA had much to do with the disparity in labor market conditions between the United States and Mexico. The US president and administration felt Mexico has had the upper hand throughout NAFTA’s history because its workers’ wages were much lower than their U.S. counterparts, partly because Mexican unions did not function independently and rarely secured higher wages and improved working conditions for workers. Those lower wages and deficient work environments meant US manufacturers could flock south of the border to save on labor and production costs and simply import their manufactured goods into the US post-production.

The USMCA attempts to create greater balance between American and Mexican labor markets by putting into place requirements that Mexico allow for the establishment of independent unions. But what if Mexico doesn’t live up to its end of the agreement? What’s America’s recourse?