Skip to content
Home Our experts speakIt is time to kill the trade deficit boogeyman
Feb 16, 2018

This article was originally published in the Journal of Commerce on February 14, 2018 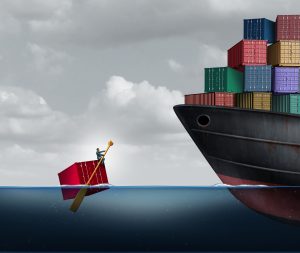 By now, most of the world is well aware the U.S. Administration and President Donald Trump are no fans of international trade that doesn’t result in reducing or eliminating the trade deficit for the United States.

During a trip to South Korea last June, the U.S. president proclaimed that the “United States has trade deficits with many, many countries, and we cannot allow that to continue.” He has called the North American Free Trade Agreement (NAFTA) “the worst trade deal ever.” And he has insisted the U.S. retreat from negotiating multilateral trade agreements (such as the Trans-Pacific Partnership) in favour of bilateral trade talks, which he believes will result in the U.S. getting a better deal. What’s unknown is just how far the Administration is willing to take this approach. Are these simply aggressive bargaining tactics that will force other countries to make concessions? Will we eventually see the U.S. retreat? Or will it follow through with threats of discouraging imports by tossing away trade deals and/or imposing punitive tariffs?

While the U.S. administration has fixated on balancing trade relationships, many economists have argued that neither a trade deficit nor a trade surplus is a meaningful indicator of economic prosperity when examined in isolation of other economic influences.

NAFTA has been called out by Washington as the culprit behind the flight of U.S. manufacturing jobs and the president has vowed to renegotiate better terms for the U.S. within the 24-year-old trade deal or otherwise terminate U.S. participation in it. The goal is to create a manufacturing renaissance that will restore these jobs. A number of studies have rejected the idea that NAFTA is behind manufacturing job losses and that terminating U.S. participation in NAFTA would bring back these jobs. Furthermore, forcing industries to dismantle NAFTA supply chains could have the unintended consequence of displacing existing jobs and sending them to new partners in the Asia-Pacific region.

But let’s assume for a moment that Washington’s current focus on correcting its international trade balance, in isolation of other economic factors, is a meaningful indicator of economic health; that the status of a country’s trade relationship with another country or the world as a whole is a benchmark by which to measure prosperity.