This article was originally published in Global Trade Magazine on Nov. 18, 2019. 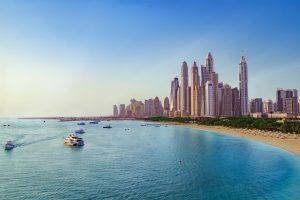 For a great many years, global businesses have viewed the United Arab Emirates as an attractive global investment market. With a strong presence of high-net-worth consumers and a geographically strategic location from which to distribute throughout the Middle East and North Africa, the UAE is rife with opportunity.

Yet, many international corporations could not own companies outright  in the UAE and were restricted to a maximum ownership of 49%. Ownership laws, however, are now being revisited to diversify the country’s economy beyond the energy sector, which has been the source of UAE wealth for decades. But precisely the degree to which economic liberalization is taking place is very much based on one’s perspective.

The United Arab Emirates (UAE), a federation of seven Emirates (member states), has served as a global centre for trade for centuries. However, most global businesses had often expressed discomfort with the country’s investment laws which, despite allowing 100 percent foreign ownership of businesses in the country’s Free Trade Zones (FTZs), stipulated that at least 51 percent of a company established  within the UAE, and outside a Free Trade Zone, must be owned by UAE citizens, or companies wholly owned by UAE citizens.

In addition, agency and distributor laws require that only a local commercial agent could sell products in the UAE market; and only UAE citizens or companies wholly owned by UAE citizens could register with the Ministry of Economy as commercial agents. Regulations also prevent the termination, or non-renewal, of a commercial agency contract unless the principal has a material reason to justify the termination or non-renewal; and the principal must often approach a court to terminate a contract.

The most recent Trade Policy Statement issued by the UAE through the World Trade Organization’s Trade Policy Review mechanism in 2016 stated the country aims to drive towards economic diversification by being less reliant on the oil sector and to increase its attractiveness to foreign investment.

The UAE enacted Federal Law No. 19, the Foreign Direct Investment Law (FDI Law) in November 2018. To promote and develop the investment environment and attract foreign direct investment in line with the developmental policies of the country, the Law established a framework for the country’s Cabinet to mandate which sectors and activities of the economy would be eligible for 100 percent foreign ownership. However, a list of eligible economic sectors and activities was not published by the UAE Cabinet until July 2019.