This article was published in Global Trade Magazine on September 24, 2017 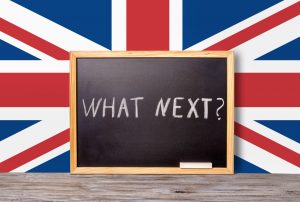 But if there’s some semblance of stability to be found in Brexit thus far, it was evident in remarks made on September 22 by British Prime Minister Theresa May during a critical speech today in Italy. Perhaps in hopes of inspiring momentum for the ongoing Brexit negotiations and/or reassuring the business community, Ms. May offered some insight into her expectations of how Brexit might roll out.

Ms. May stressed the importance of a gradual implementation period, rather than what has been called “the cliff’s edge”.  To provide citizens and business with “valuable certainty,” the integration period should be strictly time-limited and guaranteed to run from March 29, 2019 until March 29, 2021.

Such remarks offer the business community hope that maintaining stability remains a core goal of the Brexit negotiations and some mild comfort that the level of risk of doing business across the English Channel isn’t nearly as great as one might presume.

At the same time, Ms. May also made remarks that are cause for trepidation. While acknowledging the UK’s past, present and future is inherently tied to Europe, she succinctly summed up what lies at the heart of Brexit by stating; “We never felt at home in the EU”.  Clearly, these sentiments are not shared by the many companies with integrated supply-chains throughout the UK and the rest of the EU, that must amend business plans to something completely different.

Analysts have been pondering what the future of a UK-EU relationship would look like ever since the Brexit referendum in June 2016. What Ms. May made clear today is the future relationship between Britain and its European neighbors is unlikely to look anything like the relationships between the EU and Norway, Switzerland, Turkey, and more recently, Canada. “We can do so much better than this,” said Ms. May rather unequivocally.

The Prime Minister does not want to follow any pre-existing model. She wants a new UK-EU treaty that leverages the shared principles, high regulatory standards, and security relationships that are already in place, while definitively breaking the UK away to be self-determinative on matters such as immigration, court jurisdiction, and trade policy.

Even while granting that the EU’s four freedoms of goods, services, capital, and people will remain indivisible, she maintains a totally new framework is necessary. The UK will be starting from an unprecedented position of having to convert EU laws into domestic laws and make the break from that point forward. She stated; “Life for us will be different”.

When asked following her speech about the possibility of Brexit talks failing, she reiterated a comment from a prior speech; “No deal is better than a bad deal”. In other words, Ms. May is prepared to place the onus on the EU to come to the negotiating table with a willingness to be flexible. During October, the EU Commission will decide whether or not sufficient progress has been made and whether or not the negotiations can move forward to construct the future framework of the relationship.

Ms. May closed by saying; “This is the future within our grasp, so together let’s seize it.”

From an international trader’s perspective, certainty is essential.  That is why Brexit is difficult for business, it represents change and upheaval.  However, if Ms. May’s remarks will lead to a smooth transition, laid out clearly and in advance, then business can adapt and prosper in the new arrangement.