HomeHold the CETA celebration: There’s a lot in the way to stop us cementing the Canada-EU deal
Jan 25, 2017

This article originally appeared in the Financial Post on January 25, 2017. 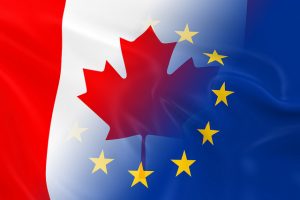 With little fanfare in Canada, a key vote took place in Europe this week in favour of the Canada-European Union Comprehensive Economic and Trade Agreement (CETA). The European Parliament’s Committee on International Trade (INTA) threw its support behind the agreement, with the committee’s rapporteur noting the backing was a rejection of spreading global protectionism and a move toward trans-Atlantic economic harmony.

The INTA decision was critical in that it will hold significant sway over the outcome of the European parliament’s own vote set to take place next month. While this is undoubtedly a positive sign for the fate of the agreement, Canadians for whom the trans-Atlantic deal is of any relevance should not yet resign themselves to the notion that free trade between Canada and the EU has been cemented.

Even a favourable vote from the EU parliament next month will not necessarily guarantee CETA’s future. Because of a decision last spring to classify CETA as “mixed agreement,” the trade deal will still need to be ratified by 27 of the union’s 28 states.