This article was originally published in Global Trade Magazine on Dec. 17, 2018 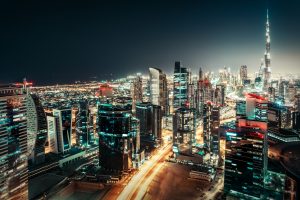 The recent imposition of a value-added tax (VAT) by the UAE raised concerns amongst global traders that the Gulf country was moving away from its traditional role of drawing in multinational investors, particularly those who use the region as a transfer hub for goods being re-exported to other destinations in the Middle East and beyond. The VAT would, after all, increase landed costs and in turn, generate a price spike for the end consumer, making products less competitive.

To ease investors’ fears, the UAE’s government has established a new, albeit complex, regime to allow global traders to continue to take advantage of the UAE’s traditional Free Trade Zones or FTZs where imports have not been traditionally subject to duties and taxes.

The United Arab Emirates (UAE), by its location, has served as a centre for trade for centuries. In recent times, Free Trade Zones (FTZs) in the UAE have helped global enterprises to serve a market size of approximately two billion people who live within a four-hour flying distance from the UAE. The UAE’s considerable investments in FTZ infrastructure that support imports and re-exports through air, land and sea modes, have contributed in making the country a global logistics hub.

As with most FTZs, imported goods are not subject to import or export duties. Thus, goods meant for regional markets are imported in bulk into UAE FTZs from production facilities around the world and then redistributed after additional processing, packaging or having been broken down to market-determined transaction quantities. According to the UAE Central Bank, a total of $61.2 billion was exported from UAE FTZs in 2017, accounting for nearly 20 percent of the country’s exports that year.

The new VAT regime implemented in 2018 applies a consumption tax on the supply of goods and services which take place within the territory of the UAE. Historically, FTZs have been considered outside the UAE territory for the application of import duty. However, for the purposes of VAT, the UAE has not extended a similar treatment to FTZs and they are deemed a part of the UAE territory for the purposes of VAT.

The UAE Cabinet has identified certain free trade zones, called Designated Zones, in which certain transactions are considered as being completed outside the UAE and, in turn, not subject to the VAT. However, businesses registered in Designated Zones have the same VAT obligations as non-Designated Zone businesses and must register, report and account for VAT under the VAT rules.